The Stories of Trans People Taken Too Soon

A staggering 45 percent of trans people in the UK have attempted suicide. 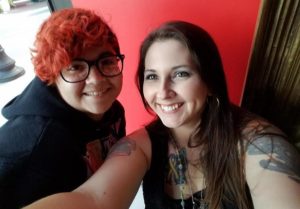 Jay with his mum, Erin.

When Jay came out as bisexual at the age of 11, he was accepted fully by his mother, Erin Georgia. A talented clarinet player, Jay was "wise beyond his years" and the family joked that he was an adult trapped in a child's body.

"One day we went clothes shopping and I noticed Jay was a lot more comfortable when we went to the boys' section," Erin, who has two small children, recalls. "When we were driving back in the car, he told me he wanted to be called Jay and only referred to in male pronouns. From that day onwards, we all referred to him as a 'he' and it felt so uplifting."

While Jay received this support at home, it was more difficult elsewhere. The family is based in Alabama – a right wing, bible-belt state that voted overwhelmingly in favour of Donald Trump. "Trump's win was incredibly traumatic for Jay, as he feared it gave people strength in numbers to hate him," says Erin. 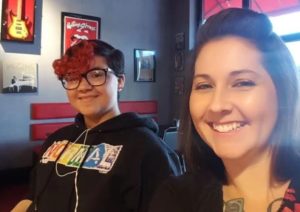 At school, kids would whisper "trans" in a passive-aggressive tone as they passed Jay in the hallway, which would create paranoia. "The school offered to let him use the adult restroom, which was a nice gesture, but it was a five minute walk and made him feel like an alien," says Erin. "He didn’t feel like he had a safe space, and I don’t think he ever used that bathroom."

In seventh grade, the school’s teachers agreed they wouldn’t refer to Jay as a she anymore, and would let him do PE with the boys. Erin would also drive the long distance to the Magic City Acceptance Centre, the only organisation in the state set up to help depressed LGBTQ youth, and switched the family to a more inclusive church. But this didn't stop Jay's anxiety or depression, and he started to self-harm. 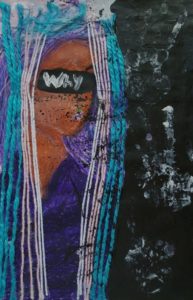 One of Jay’s paintings

"I remember he had a week left of seventh grade and was really anxious about his grades [the night before]," Erin tells me, her voice beginning to crack. "My husband got up early in the morning [of the 25th of May, 2017] and noticed Jay's light was on. He was hanging in his closet, and because there was dried blood on his chest we knew it was too late and there was nothing we could do."

Erin met her husband while serving in the Marines, and her grief has been compounded by Trump banning transgender people from serving in the US military. However, she still maintains a message of hope: "I'm sure there are people in our community who didn’t accept Jay, but you can’t just attack the other side," she says, "you need to start a dialogue if there’s any hope for change." 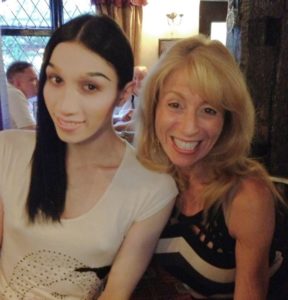 At 12, Synestra De Courcy came out as gay. By the time she was 18, she had realised she wanted to undergo gender-affirming surgery. Almost instantly, Synestra encountered hostility from her local GP, according to her mother, 50-year-old Amanda de Courcy.

"They kept turning her down for referrals and she became very despondent,” Amanda says. "They put every single obstacle they could in our way; the idea of Syn simply wasn’t palatable for most GPs." While studying cosmetic science at London's University of the Arts, Syenstra, a straight-A student, turned to sex work as a way to fund her transition privately.

As a high-class escort, indulging in drugs with clients came with the territory. And, much like Vikki, Synestra used recreational drugs as a way to cope with her increasing depression. With the money she earned through sex work, Synestra spent £25,000 on her transition over a four-year-period. This included a boob job, a lip lift and paying £500 a month for hormones imported from India. "It wasn’t a safe way of getting them," adds Amanda, "but, as I later learned, she had completely lost faith in the NHS."

Over this period, the abuse from strangers got more and more serious. "She got beaten up, attacked, raped for the first time at the age of 20," says Amanda. "People just assumed she was promiscuous, and we were more or less told by the court, 'She's a trans girl, what do you expect?'" But this didn't dent Synestra's confidence, or her dream of launching a range of cosmetic products.

On the night of the 25th of July, 2015, Synestra went to London’s drag club WayOut with her partner before moving to a house party. During the course of the night, Synestra took cocaine and mephedrone, as well as drinking neat vodka. The next day she was found unconscious with no pulse. She was dead by the following evening.

Although this might not sound like suicide, her mother considers it one. "It was like a slow suicide, as she no longer cared about the consequences of taking drugs," explains Amanda. "She was fed up of waiting for the surgery and not being who she wanted to be, so she took drugs to numb her pain – for her, it was worth the risk."

Having been subjected to "sensationalist" reporting by journalists in the past, *Ellen's family have asked for her identity to be protected due to fears of intrusion. Therefore, names and details have been changed.

Ellen didn't come out as trans until the age of 25, but her work made it clear she could use the female toilets and her family provided her with the "strongest support network possible".

It took Ellen two years to get a referral to see a surgeon, and she began taking hormonal drugs ahead of gender reassignment surgery. However, her sister, Susan, believes Ellen still didn’t have enough access to counselling outside the family "in order to come to terms with the difficulties of experiencing a second puberty". Ellen also lived alone, naturally bottling up a lot of her emotions.

"She started wearing headphones in public, as people would shout abuse out of cars," Susan tells me. "I remember the time that really hurt her wasn't an intentional one. In a shop, she was paying for something and the shop assistant said, 'Thank you, sir.' This was a real setback."

One day, Susan received a worrying text message from Ellen, which came "completely out of the blue", and when police went round to her flat they found her dead. Susan adds: "I just wish people could see beyond what people look like and remember there’s a person inside who feels pain just like the rest of us. If people were nicer to one another, well, maybe she would still be alive.

So what's being done to help young people like Jay, Vikki, Synestra and Ellen? In the UK, not nearly enough, according to Susie Green, CEO of trans charity Mermaids.

"Cuts to adolescent mental health services, coupled with the NHS being ill-equipped to deal with transgender young people, means that local services are difficult to access and often require a young person to be actively suicidal before they will be seen," she explains. "Things are going backwards, and we're 30 years behind the gay rights movement."

Green claims that even trans people referred to a surgeon still face years until they are finally seen – a period in which they receive no counselling: "Frankly, the Tavistock Gender Identity Service [the largest and oldest gender clinic in the UK] is struggling to cope with demand," she says – something Amanda de Courcy agrees with. Had Synestra lived (she would now be 25), Amanda speculates she would have ended up spending a total of £50,000 on private gender reassignment surgery.

"Synestra died on the 26th of July and we her got referral through our letterbox on the 4th of August," says Amanda. "But I was told from surgeons [after her death] that she would have waited at least another year. She simply couldn't wait that long."

With trans activist and VICE regular Paris Lees appearing in Vogue, the women’s select committee debating trans equality and TV shows such as ITV's Transformation Street giving the trans community mainstream exposure, there are small signs that the UK is becoming more inclusive. However, for things to truly change, Vikki Thompson's mother Lisa Harrison offers the following solution: "They need to be teaching kids at schools that you don’t wake up and decide to be trans. You are born this way, it isn’t done on purpose, and these people need our support."

Abuse from strangers was something Vikki Thompson had to deal with from a young age. Her mother, Lisa Harrison, now 43, has noticeable facial burns from being caught in a house fire. "I got abuse from strangers," says Harrison, "but Vikki stuck up for me and shouted stuff back at them."

Harrison still carries guilt for the way she treated her daughter when she first came out as trans at the age of 11. "Vikki was born a boy, and from a young age would wear high heels and nighties. I thought it was just a phase and I was horrible at first, I have to admit that. We’re from a working-class community and I had nowhere to learn," she says. But "later on, it became obvious to me she was a woman, and I supported her 100 percent – she was my baby. We became best friends. The tables turned, and when people would shout abuse at her I would shout something back."

Through social services, Vikki won a referral to a hospital in London, but they were unable to treat her while she was still taking drugs – a coping mechanism for her manic depression. On disability benefits and unemployed, Vikki would occasionally steal from shops to support herself. A family acquaintance accused her of stealing a mobile phone – something Vikki always denied – and she was subsequently arrested. When she violated the terms of her bail, she ended up in prison – a men's prison.

"They wouldn’t let her go to a women’s prison as she didn’t have the right papers [a gender recognition certificate]," says Harrison, still baffled by the decision. "She was depressed, coming off drugs and in a really vulnerable state. She told me: 'Mum, if I go there, they will bring me out in a box.'"

Vikki hung herself in her cell on the evening of Friday the 13th of November, 2015. At the inquest into her death, HMP Leeds prison was described as understaffed, chaotic and in a poor state of repair. In fact, it took guards longer to spot Vikki’s body as the light in her cell had stopped working. The inquest ruled Vikki had been neglected by the NHS and an "unprofessional" prison service. "Our prison system is broken for trans people," adds Harrison. "Vikki would give you her heart. I miss talking to her."